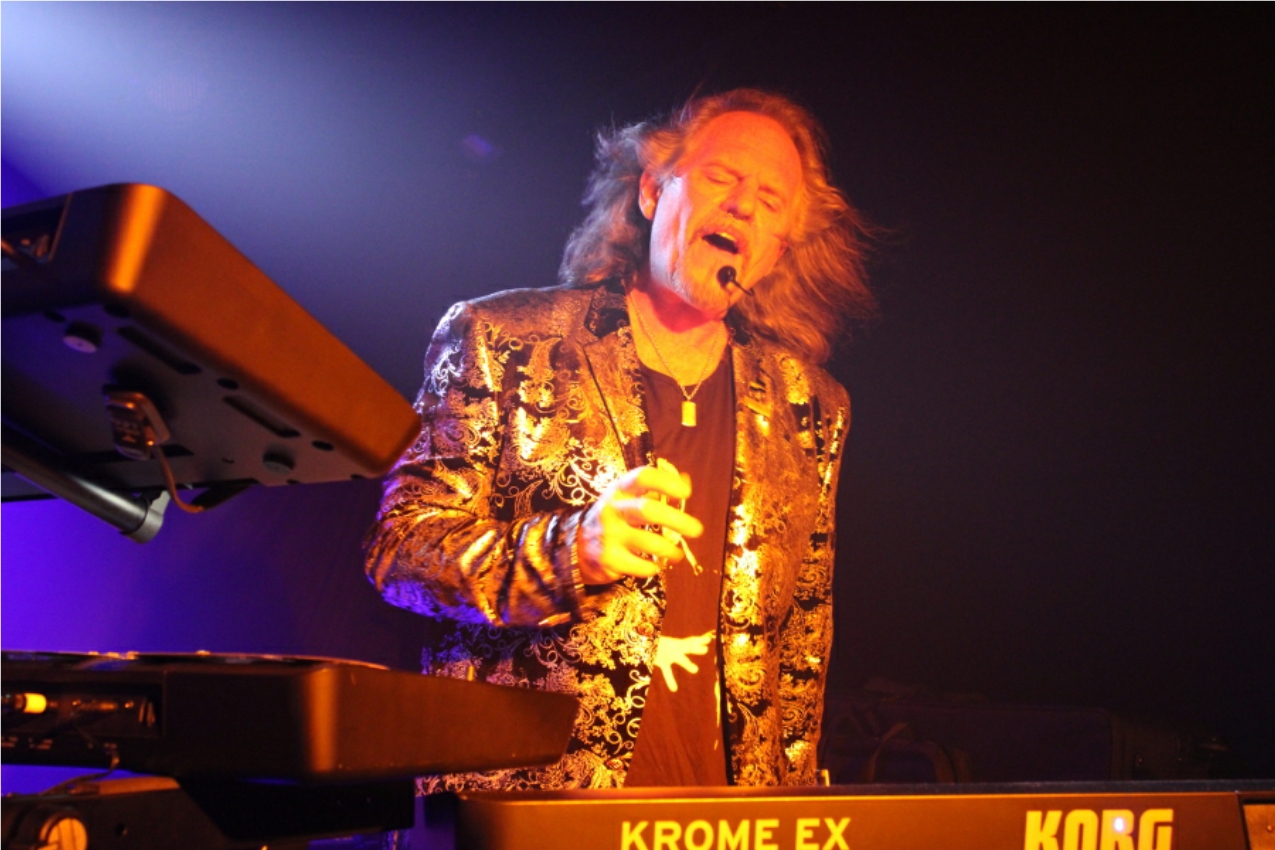 Music isn’t just a hobby for Rick Allen, it’s his life’s passion. Rick, a retired truck driver who lives in West Falls, New York, has discovered that with some minor adjustments to the way he performs and the support of his family, bandmates, and his AlphaNet Coordinator, he can still pursue his passion of playing in a rock band.

Rick grew up in a small town in western New York and was interested in music from an early age. His mother’s side of the family was musically inclined — his great aunt was renowned opera singer May Esther Peterson Thompson who toured Europe in the 1910s-20s and trained and performed on stage with the legendary tenor Enrico Caruso at the Metropolitan Opera in New York. Rick played the drums for 8 years as a child and taught himself how to play the organ and the piano when he was 15 using The Beatles, Elton John, and The Eagles songbooks that had guitar chord names above the sheet music to guide him.

In the late 1970s, Rick joined a band as a keyboard player and continued to hone his craft. He was always naturally talented at singing and he soon started singing lead vocals for different bands covering songs from Journey, Styx, Kansas, and Yes, among others.

In 1989, Rick co-founded Styx tribute band Grand Illusion where he served as the lead singer and keyboard player. Throughout much of the 1990s, the band played shows “from northern Quebec, Canada to southern Pennsylvania, USA, and just about everywhere in between.” Rick fronted a number of other bands during his time with Grand Illusion and in the mid/late 90s, he and some of his Grand Illusion bandmates formed a Scorpions tribute band called Blackout. In 2008, Rick formed an independent original alternative hard rock band called Bone Deep and released his debut CD called “Snap,” which earned local acclaim.

In the late 2000s, Rick began to notice that singing was becoming increasingly challenging due to persistent breathlessness. He didn’t know why this was occurring as he was fit, healthy, and a nonsmoker. As his breathing worsened, he eventually made the difficult decision to stop singing and performing. In 2011, while training as a certified rescue diver, Rick noticed that the surface rescue exercises, which included performing CPR on a “victim” while floating in the water, had him out of breath. By summer 2011, he knew something was wrong when he was unable to breath while hiking the Devil’s Hole at Niagara Falls Gorge. After visiting a number of doctors, Rick was finally diagnosed with Alpha-1 in 2014 by a physician’s assistant at his pulmonologist’s office who recognized his symptoms and thought to test him for the condition.  By this time, his pulmonary function tests indicated he had 30% lung function (the year prior he had 52% lung function). He was prescribed augmentation therapy in December 2014 and, a year later, his lung function had stabilized at 33%.

For Rick, not being able to sing to the best of his ability was the most gut-wrenching outcome of his Alpha-1 diagnosis. He was robbed of his passion. If he couldn’t sing and perform at the highest caliber, he didn’t want to do it all. What eventually changed his outlook was speaking with his AlphaNet Coordinator at the time, Dan Hicks (who passed away in 2019). Rick formed a close friendship with Dan as they shared a number of mutual interests, including cars and music. Dan encouraged Rick, who was not at all keen on the idea of using oxygen on stage, to sing again with the help of supplemental oxygen. Rick was skeptical that he could even still sing at the same caliber. To test out his vocals, he jumped in his car, got on the highway, and blasted Styx music from his car radio while singing at the top of his lungs with his oxygen. To his delight, he was still able to sing well, which gave him the confidence to move forward with his plan of resurrecting the band.

With his wife’s blessing, Rick reached out to his bandmates from Grand Illusion in late 2018 to see if they were interested in reuniting. They were on board and had no issue with Rick’s use of supplemental oxygen on stage. Before his first show back in April 2019, Rick and his wife took a cruise vacation and he ended up winning The Voice of the Ocean singing competition. Winning this competition gave Rick the extra confidence boost he needed to dive back into singing again. “The moment I walked on the stage and saw this massive crowd in front of me, it was like being home again. I felt like myself again,” Rick said.

During Rick’s first show after his long hiatus, he had great difficulty breathing even though he was using supplemental oxygen throughout the performance. After the first set, Rick thought he wasn’t going to be able to continue singing but he soldiered on. What he realized after the show was that if he made some minor adjustments to how he was performing, he could avoid the extreme breathlessness he had experienced. He purchased a stool to set his oxygen tank on so he could use a shorter oxygen cannula. He also invested in a better oxygen valve, as the one he was using was not providing him nearly enough air flow. Finally, he stopped using a 7-foot oxygen cannula extender and, instead, stuck with a 4-foot cannula which allowed for much better air flow. With just those simple changes, Rick found that he could perform better and sing for a longer period of time without becoming completely out of breath.

Now that he has once again hit his stride, Rick is looking toward the band’s future. Even though the coronavirus pandemic postponed some of Grand Illusion’s 2020 shows, the band is set to perform in November at The Rapids Theater in Niagara Falls, New York. Next year, the band already has several shows lined up and Rick is so excited at the prospect of getting back to performing and is happy to be back doing what he loves most! “One of the lessons I have learned through all this is don’t think you are ever too sick to try. Another lesson I’ve learned is once you try, if you do find it’s too difficult, don’t quit. Try other things to make it work for you! I have the support of those around me, including my wife, and I’ve had two great Dans in my life from AlphaNet – Dan Hicks and my current Coordinator Dan Grimm – and I am so thankful for their encouragement.”