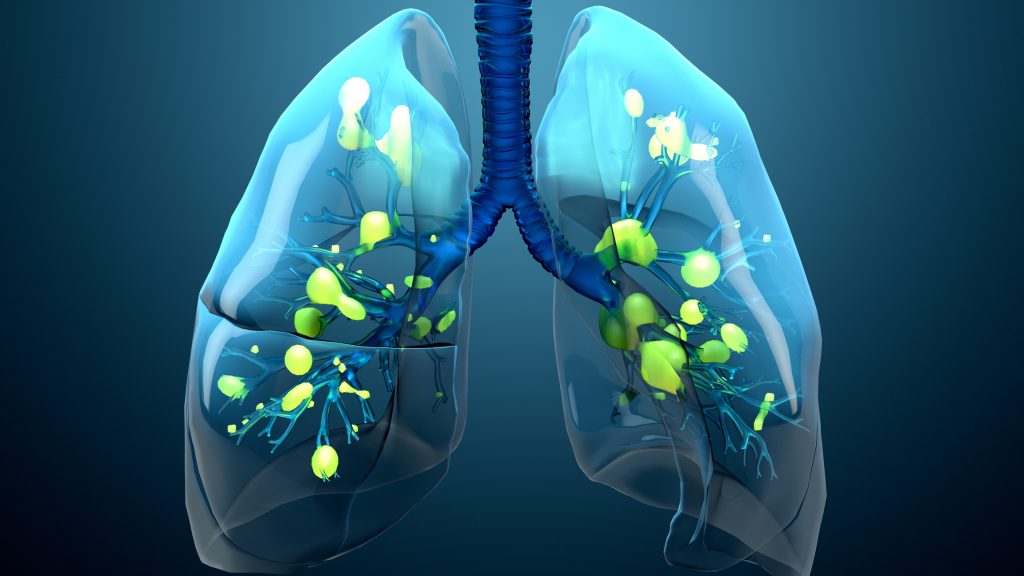 Let’s review some of the common lung diseases that can cause respiratory problems. Understanding them may help you take a more active role in managing your lung disease.

Chronic obstructive pulmonary disease (COPD) is a chronic inflammatory lung disease that causes airflow blockage and breathing problems. Emphysema and chronic bronchitis are the most common types of COPD.

In COPD, the airflow blockage progresses slowly and may be accompanied by airway hyperactivity (asthma).

Cigarette smoke is the main cause of COPD. It can also be caused by exposure to wood smoke, air pollution, fuel, dust, and chemicals.

In fact, many Alphas are diagnosed with COPD several years before they get their Alpha-1 diagnosis. We strongly recommend Alpha-1 testing for anyone with COPD.

What are my treatment options for COPD?

COPD symptoms are the same, whether you get it from your environment or genetics. How you manage the disease is also similar, but with some differences. Some people with Alpha-1 COPD get Augmentation Therapy to boost their alpha-1 antitrypsin levels.

The word bronchitis means inflammation of the air passages in your lungs. When you have bronchitis, your bronchial tubes swell, mucus glands multiply, and mucus production increases. This leads to coughing and shortness of breath.

In chronic bronchitis, the lining of your bronchial tubes lose their hair-like projections (cilia). When this happens, it’s harder to cough up mucus. That causes an endless cycle of coughing, irritation, and more mucus production.

What makes it “chronic?”

Common symptoms of chronic bronchitis include:

This is a condition in which your lung’s air sacs (alveoli) are damaged and enlarged.  There’s less surface area for the exchange of oxygen and carbon dioxide in these larger air sacs. So, less oxygen is absorbed into your blood. In severe cases, you exhale less carbon dioxide.

As your small alveoli are destroyed, your lungs stretch out and become less flexible. They can’t expel air when you exhale. Your bronchial tubes (airways) become “flabby” and collapse when you exhale. When air builds up in your lungs, your diaphragm becomes flattened and can’t help you breathe.

Asthma is a chronic condition that makes it hard to move air in and out of your lungs. It is one of the most common lung diseases.

When you have asthma

This blocks the airflow in and out of your lungs.

Unlike other lung diseases, if you have asthma, you can take medicine to help unblock your airways and make it easier to breathe. It is a “reversible” condition.

You may also be able to reverse some blocked airflow if you have COPD. But, you won’t be able to unblock it entirely — even with medicine.

If your blocked airflow is reversible, you don’t have COPD. However, some people with asthma may develop irreversible airflow obstruction that looks just like COPD when it’s measured by a simple spirometer.

Common symptoms of asthma include:

People with Alpha-1 lung disease often have bronchiectasis or severely damaged and chronically enlarged airways. Thanks to the increased use of CT scanning (lung computerized tomography) we now understand that many people can have severe airway enlargement without symptoms. This is especially true for Alphas.

Airway infections make bronchiectasis worse, whether you get many infections or just one bad one.  These infections can come from viruses, bacteria, or atypical mycobacteria that are similar to tuberculosis.

Symptoms occur when secretions from your damaged airways form pools. This creates a breeding ground for all kinds of germs.

When bronchiectasis symptoms occur, they can include:

As you can see, many lung diseases may affect your experience as an Alpha. You’ll need breathing tests and a computed tomogram (CT) to sort out if you have one or more of them.

Have you seen the Big Fat Reference Guide? We have more information if you’d like to learn more about common lung diseases for Alphas.