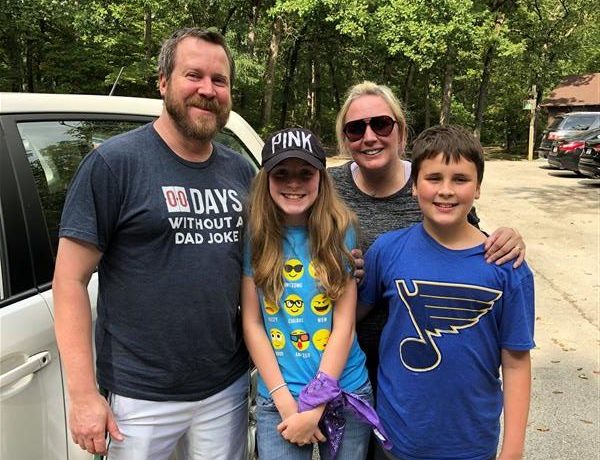 AlphaNet Coordinator Siobhan Lestina shares her Alpha-1 diagnosis story and how she took control of her diagnosis with the support of her family, friends, and medical team. This article was originally featured in the Fall 2017 AlphaNetter and is being shared here in recognition of the 10th anniversary of Siobhan’s Alpha-1 diagnosis.

Seven years ago on June 30th, I received the news that would change my life forever. Little did I know at the time that this would also be the beginning of a new chapter in my life, one that would bring new meaning and, in a way, breathe new life into me

I remember where I was standing when I got the news – in my bedroom, getting ready to go see the new Twilight saga movie. I had been suffering from various breathing issues previous to this, but put it down to my asthma, to weight gain from having two babies close together, or being worried about living in Cheyenne, Wyoming with a young family and having no support as our families lived many driving/flying hours away. I always had an excuse for what the cause was because I didn’t want to believe that it could be anything serious. We were getting ready to move to St. Louis, Missouri to be closer to my husband Ryan’s family. He was close to being hired for a new job there and it seemed like things were finally starting to turn around. I remember standing in that bedroom thinking that things were starting to look up and that the worst was finally behind us.

Then came the phone call. I heard the phone ring and I knew. I heard Ryan say “Hi, Dr. Popova, I’ll get her,” and I knew. I knew if the doctor was calling after hours that the news couldn’t be good. I will never forget those words, “You have the deficiency. You are a very sick girl but we are going to help get you better.” It was the first time I had been called a very sick girl for something other than my sense of humor!

I will never forget that feeling of hopelessness. That feeling of not knowing if I would see my babies grow up — my babies that we had tried so hard for. We had overcome the odds to have two beautiful, healthy children and now it seemed as if they were going to have their mommy ripped away from them. It seemed like the world’s cruelest joke.

I didn’t know much, or really anything, about Alpha-1 Antitrypsin Deficiency other than it is what took my Aunt Grace from this world. She died when I was in college and only her children were advised to be tested at that time.

I convinced myself I was dying and started living my life that way. I felt like I didn’t have anyone to talk to. We had moved to St. Louis and away from the doctor who had diagnosed me and I didn’t know where to go from there. I found a pulmonary specialist who unfortunately did not feel comfortable treating me and decided not to take my case. Instead of finding another doctor, I fell into a mild depression, but I knew I had to keep it together for my kids, and they helped keep me from completely falling apart.

Ryan was, and still is, my rock. It could have been easy for him to walk away and not have to deal with a chronically ill wife who cried a lot, and on occasion was bitter and angry, but he didn’t. He supported me, even on my darkest days, and he understood my frustrations and accepted my mood swings. He hid his own fear so as not to upset me, and he let me come to terms with my diagnosis in my own time.

My “own time” took almost two years. In 2012, I went to a pulmonary specialist as recommended by my new primary care physician. I walked into her office and her nurse greeted me with a huge smile and asked if I was the new patient with Alpha-1. When I confirmed this, she became excited because her sister worked at the office where the augmentation therapy I would be receiving came from, and she enthusiastically promised me that they were going to take care of me.

For the first time in the two years since my diagnosis I genuinely felt that everything could be okay. The doctor admittedly did not know much about Alpha-1 and I was her first patient, but she was so willing to learn about it that I knew I had come to the right place. Within days, I had a phone call from my patient service center explaining the infusions to me, how they could help, and informing me that there was a patient support organization for Alphas called AlphaNet and would I be interested in having them contact me.

I finally had that huge weight that had taken residence on my shoulder evicted! There was hope again – hope that I would get to see my kids graduate high school, college, get to see them marry, maybe even see my grandkids! And not only that, but there were other Alphas out there, and they wanted to talk to me! I felt like I could breathe again…metaphorically speaking!

It was time to start living again. And live I did. I started traveling again and decided that, with the help of a little oxygen, I did not have to be restricted. I volunteered for the Parent Teacher Organization (PTO) and tried to go to as many of my kids’ school functions as physically (and mentally) possible. I went to the community college to brush up on my computing and Microsoft Office skills, and I even walked a few 5Ks.

I attended my first National Conference in 2016 and was so inspired by the people I met and the education that was offered, that I came home and told Ryan that this is what I wanted to do. I wanted to help other Alphas the way I had been helped. Four months later, I started working for AlphaNet and have met the most amazing, encouraging, and inspirational people. The courage, compassion, and love that exudes from them is wonderful and I can see them making a difference in the lives of others, as they did for those many years ago.

I was able to bring Ryan to his first National Conference and introduce him to my AlphaNet family. Being a part of this community has been a humbling experience. Seven years ago, I had lost all hope and thought my life was over. Now, seven years later I am reflecting on how this diagnosis has brought me a life that would never have been possible otherwise. I love what I do and I can only hope that I can bring some hope to those who are finding themselves in the same place I was not so long ago.

“I will continue to show Alpha-1 who’s boss for as long as I can breath and hopefully keep educating others in the process.”