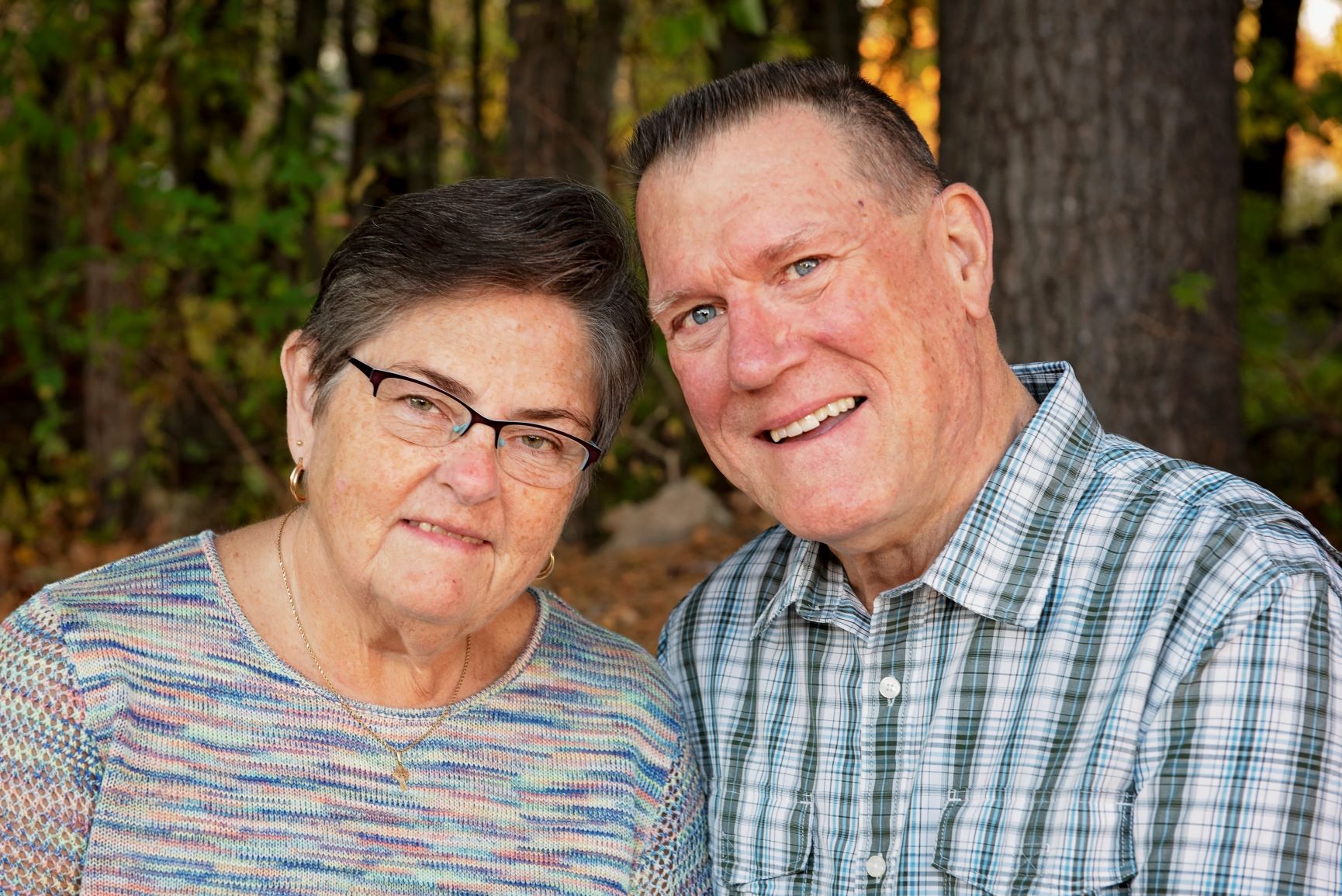 Dan Coffin has been an AlphaNet subscriber since 2012, but also served as an AlphaNet Coordinator from 2016–2018. During that time, he used his past experience as a minister to inspire and encourage his subscribers to “live their dash” — referring to the hyphen that appears between the birth and death dates on a headstone — by making the very most of each moment of their lives regardless of their Alpha-1 diagnosis.

Dan Coffin was diagnosed with Alpha-1 Antitrypsin Deficiency shortly after his 60th birthday in June of 2012. “It was a great present” he jokes now, but he does feel fortunate that his Alpha-1 journey didn’t include years of bouncing from doctor to doctor trying to find answers. Instead, he was diagnosed within a two-week period after his wife Kathi, an emergency room nurse, caught him trying to silently recover from a lung exacerbation. After years of being physically fit, he knew something was amiss when he started to become increasingly short of breath. Suddenly, he could no longer push a lawn mower for more than ten minutes or shovel snow, but multiple tests confirmed what he never suspected — he was an Alpha.

Dan joined AlphaNet shortly after his Alpha-1 diagnosis. Once his doctor prescribed augmentation therapy, he was contacted by his specialty pharmacy and was invited to join the AlphaNet program. He accepted and was soon contacted by Angie Town who became his AlphaNet Coordinator and remains a lifelong friend to this day. After retiring from a 31-year career as a Pastor in 2015 due to shortness of breath, Dan became an AlphaNet Coordinator himself. During the two and a half years that he served as an AlphaNet Coordinator, Dan used his experience in the ministry to connect with his subscribers and encourage them to live full, active lives. “Unfortunately, some doctors still say ‘Well, this is a death sentence so you might as well get your affairs in order’ and that is so not true,” Dan said. “That is part of why we work so hard at AlphaNet and the Alpha-1 Foundation to get the correct information out there to the doctors that are changing lives by giving people that Alpha-1 diagnosis. And that’s the importance of the AlphaNet Coordinators who get to talk to these people right from the get-go.” Dan is grateful that he was able to be there to help so many fellow Alphas from the very beginning of their Alpha-1 journey, a critical period for many Alphas where the need for support from others and educational resources about the condition is at its highest.

Inspired by the poem “The Dash” by Linda Ellison, Dan has always encouraged his fellow Alphas to “live their dash” — referring to the hyphen between the birth and death dates on a person’s headstone. Dan often reads the poem in celebration of friend’s lives during funerals and memorial services. To Dan, living your dash means living each and every day to the very fullest and trying your best to positively impact the lives of others. “[The dash] is what matters because the date of birth is a moment and the date of death is a moment, but only those that knew and loved you know what that little dash is worth. And so, I am challenging people to live their dash.”  He even shared this poem and his dash philosophy during a 2015 Alpha-1 Education Day, much to the delight of AlphaNet and Alpha-1 Foundation Founder John Walsh who encouraged him to make it a tradition — one Dan hopes to continue once in-person education days resume.

However, while encouraging his own subscribers to stay positive, live their lives to the fullest, and maintain their health, Dan knew he could be doing more to take care of his own health and fitness. It wasn’t until suffering a heart attack in June 2020 that Dan received the wake-up call he needed to start taking his health seriously again. A very active child growing up, Dan’s father would often joke that his son never walked anywhere when he could run instead. He participated in competitive running all throughout school until enlisting in the United States Army right after high school graduation in 1970. During his 14 years on active duty, he stayed in peak physical condition until he left the armed forces to join the ministry in 1984. His doctors speculate that his Alpha-1 diagnosis was delayed for so many decades as a result of the years he spent being physically active and looking carefully after his health.

After his heart attack this year, Dan realized he needed to get back into shape and start living his dash again. His friends reached out to him, thankful that he was doing okay and sharing that they were worried that they were going to have to read “The Dash” for Dan this time. Inspired to make a change for the better, Dan seized the opportunity to re-enter the world of fitness once his doctor gave him medical clearance. He immediately started cardio rehab and began exercising three days a week, for an hour at a time, under medical supervision. After completing just 13 sessions of the 24 that were recommended to him, he was deemed fit enough to leave rehab and begin his own independent fitness journey. Dan found the inspiration he needed to continue making improvements to his health when he decided to participate in the annual Escape to the Cape fundraising bike trek, where participants ride 160 miles to raise funds for Alpha-1 research. Despite the ride being virtual this year, Dan made it his goal to reach 160 miles by the end of the month of September. He started small, riding just 5 miles a day until he quickly realized he had the energy for more. He ended up reaching his 160-mile goal by the middle of month, riding up to 26 miles some days and completing over 466 miles by the end of September, landing himself in 4th place on the fundraiser’s leaderboard. Dan and his friends and family have been blown away by his physical transformation, which also included a 30-pound weight loss. Besides the 466 miles he rode this summer, Dan also completed an 8-and-a-half-mile hike with his church group and surprised himself and others when he completed it before many of his younger peers. “I find myself taking steps two at a time. I feel 35 years old again,” Dan said.

In addition to riding his bike, walking, and participating in hikes, Dan keeps fit by taking care of the 17-acre lakefront property in Maine he regularly uses to host ministry retreats and Alpha-1 support group meetings. Dan continues to keep in touch and inspire those who know him in the Alpha-1 community, encouraging them to live beyond their diagnosis and not let it hold them back in any way.

Many of Dan’s family members have now been tested for and diagnosed with Alpha-1 and he similarly encourages them to take care of themselves while they are young and active so they can avoid complications. While most of his family members are carriers, one of his grandsons (who is a ZZ Alpha with some liver issues) once asked him if he would also need to “take all those needles,” referring to the weekly infusions Dan receives to treat his Alpha-1. In reply, Dan said simply that he should “eat well, keep fit, and avoid drugs and alcohol” — recommendations he makes to all Alphas who want to maintain their health and avoid the issues often associated with Alpha-1. “If you start and you fail, you’ll still be further along than when you first started” he says to those who are apprehensive about starting their health and fitness journeys.

“If I can do it, you can do it. You don’t have to do 466 miles, but really, nobody has an excuse for not at least walking. Even if it’s just 10 steps there and 10 steps back with rest in between. Start small but just be willing to push yourself. This isn’t just blowing smoke that you can make a real change between exercise and diet and staying positive. I know from years of physical fitness that it’s a mental game. You know the feeling, you know what you have done before, and you know that it’s going to hurt and burn for a certain period. But, as you push at it, you’ll get over that hump and then you get the invigoration of the accomplishment,” Dan said.

You can read “The Dash” by Linda Ellis here.

“If you start and you fail, you’ll still be further along than when you first started.”