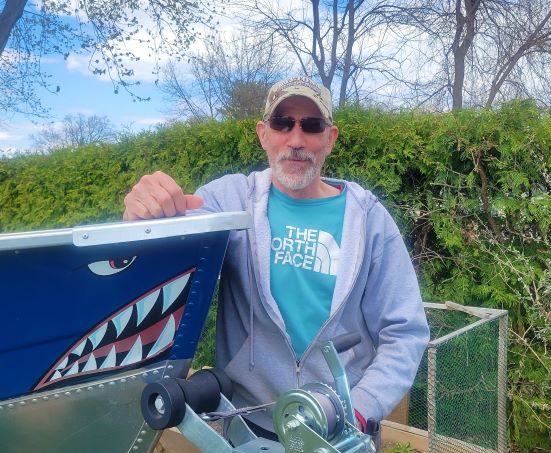 Michael (Mike) Allen has been an AlphaNet subscriber for over two decades. Read on to learn all about how this active Alpha gives back to his community while woodworking and competing in the world’s premier online racing game.

Mike Allen is from a small, close-knit community in upstate New York. Growing up surrounded by other young families and friendly neighbors, he developed a strong sense of community that continues to guide him today. Since his retirement, Mike has dedicated his time to staying active in his local community, supporting his fellow Alphas, and raising awareness for the condition that he first learned about over 20 years ago.

For nearly 38 years Mike worked in the construction industry, but the last few years were hard on his lungs. In the late 90s, Mike began to develop yearly bouts of pneumonia and in 2000 he was admitted to the hospital for severe bronchitis. He was released after a 10-day stay but still didn’t feel quite right. His brother, a licensed nurse practitioner, suggested that it might finally be time for him to see a lung specialist. As luck would have it, at the time, Mike was working on a remodeling job for the head of nursing at one of the largest hospitals in the area, and she was able to provide him with the reference that would change his life. “I said ‘Mary Joe, I’m no better.’ And she could see it. I asked her if she could recommend a lung specialist and she said ‘Absolutely’.” Mary Joe referred Mike to Dr. Dennis Gort, from Pulmonary Critical Care Services in Albany and Mike called to schedule an appointment right away. After listening to Mike’s symptoms, Dr. Gort told him he would like to test him for a rare genetic lung condition. When the results came back, Mike and his father met with Dr. Gort who let them know that Mike had Alpha-1 Antitrypsin Deficiency. He was started on augmentation therapy right away, and that’s when he connected with AlphaNet. His coordinator Pat MacInnes was a double lung transplant recipient who answered Mike’s questions and showed him that it was possible to live a full and active life after an Alpha-1 diagnosis.

Mike continued to work in construction for the next 16 years until he realized that it was simply too hazardous for him to continue. The constant exposure to dust and chemical fumes were beginning to take a toll, and as he became more informed on his condition, he began to realize that he was putting himself in real danger. When Hurricane Irene damaged his home in 2011, Mike was given extended time off to make repairs and his children convinced him not to return to construction and maybe try retail. Mike still wanted a way to work with his hands and help people improve their own homes, so he decided to apply to Home Depot and was told he was overqualified. Lowes, however, had no qualms about his years of experience and hired him just a couple of days later. He enjoyed the work and loved being able to lend his expertise in the various departments, but eventually, the exertion of walking throughout the store, the regular exposure to dust, and the draft from the open doors during winters made it difficult for him to continue working there as well. He left Lowes, but not before he met his number one supporter, his wife Diane.

These days, Mike satisfies his passion for hands-on work by creating small intricate wood projects in his woodshop. He makes many items including cutting boards and custom cheese boards made from premium wood. After creating a 3D chevron cutting board made from cherry and maple woods, Mike decided to auction off his piece on Facebook. His board sold for $150 within minutes and Mike donated the full $150 to his local hospital’s COVID-19 fund. One of his next charity auctions included a cutting board with a set of matching custom coasters and he was able to donate the high bid from that auction to his community’s animal abuse foundation. He created a Facebook page called MEA Woodwork to showcase the projects he has created throughout his career. When we spoke to him last, he was in the midst of creating a new custom cutting board for the silent auction at the Celtic Connection. All funds received from the auction of the custom board went to the Alpha-1 Foundation.

When Mike is not creating beautiful wood pieces for charity or spending time with his wife, he enjoys driving a NASCAR truck around America’s most popular race tracks at top speed—virtually—thanks to the iRacing platform. iRacing is an online PC racing game that allows users to experience what it’s really like to drive a race car. The simulator program is utilized by professional race car drivers from Formula 1 to Nascar and incorporates real track layouts from around the world to give users a genuine racing experience. Virtual cars can be customized to fit a driver’s preferences and it’s not unusual for brands to sponsor iRacing drivers just as they would sponsor professional drivers in the real world.

For Mike, the platform has become another way for him to raise awareness for the causes close to his heart. One of his young nephews, Trevor, suffers from a severe brain injury caused by a drowning accident that occurred just over two years ago. For the two-year anniversary of the incident, Mike decided to design a car in Trevor’s honor and posted in an iRacing community page letting others know about his idea. The response was immediate and he received messages from other racers from around the world wanting to get involved in the project. Before the accident, Trevor loved tractors and plans were quickly drafted to design a farm tractor-themed car that displayed a picture of Trevor in a tractor and read “Pulling for Trevor” across the hood. Mike has also raced in support of his local children’s cancer foundation, driving another custom car displaying their logo on the side. The next cause he plans on raising awareness for is Alpha-1. He is already in the process of designing a car that will read “Ask Me About Alpha-1” across the side. With thousands of players from around the world viewing each virtual race, he has no doubt that this will help inform at least the racing fans of the world about Alpha-1. “I want to do it for all the Alphas out there,” Mike says.

Aside from his charitable endeavors, Mike is also the co-leader of his local Alpha-1 support group. While COVID-19 has stalled their regular meeting times and even compelled them to experiment with Zoom, Mike is looking forward to meeting with his fellow Alphas in person again very soon. To those who have recently been diagnosed with Alpha-1, Mike’s advice is “Stay strong. Stay positive. There’s a lot of help now compared to years ago. The main key to staying healthy as an Alpha is to take care of yourself, eat right, and exercise. And make sure to give back when you can.” Mike’s motto is “I refuse to lose.”