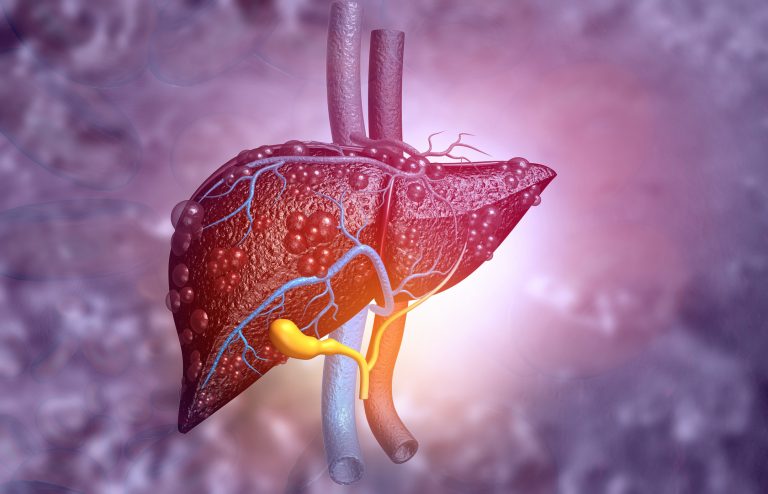 Your liver is one of the most important organs in your body – it removes waste, aids in digestion, and synthesizes proteins your body needs to function. One of those proteins is Alpha-1 Antitrypsin (AAT).

Alpha-1 Antitrypsin (AAT) is manufactured in the liver and released into the bloodstream where its job is to protect your body’s tissues from proteolytic enzymes that break down proteins in the body. When the body is attacked by foreign agents – bacteria and viruses – it releases white blood cells to fight off the invasion. Neutrophils are a type of white blood cell that utilize a variety of proteolytic enzymes when defending the body, one of them being neutrophil elastase.

Normally, a balance exists in the body between AAT and neutrophil elastase. AAT is made in large quantities within the liver and then released into the blood, protecting the body from any damage to normal lung tissue the neutrophil elastase may inflict. However, individuals who carry two abnormal genes for Alpha-1 (usually two “Z” genes, with the “M” gene considered normal) produce an abnormal AAT protein which is unable to be released well from the liver cells. Therefore, the AAT accumulates within the liver, resulting in a deficiency, or low levels, of AAT in the blood.

While the lung damage in Alpha-1 Antitrypsin Deficiency, or Alpha-1, appears to be directly related to the low blood level of AAT, the liver is thought to be damaged by the unusual internal buildup of the abnormal Z protein. The liver disease associated with Alpha-1 leads to scarring, loss of liver function, and blockage of the blood flow through the liver called cirrhosis. Liver disease in Alpha-1 can occur in newborns, children, or adults.

It is always important to confirm the diagnosis of Alpha-1 if this has not been done. The initial diagnosis of Alpha-1 rests on finding a low level of AAT protein in the blood. However, liver disease risk is very specific to the different kinds of alpha-1 protein, so a sample of the patient’s blood is also needed to identify the abnormal AAT protein variant (usually the Z protein). From a liver disease perspective, testing the gene variants with a “genotype” is preferable to testing how the protein moves on a gel (“phenotype” or “PI-type” testing). This is because increased liver disease risk is associated with the number of copies of a Z gene variant present.

Each of us has 2 copies (also called alleles) of DNA that make up the alpha-1 gene (SERPINA1). If both copies are variants that code for the Z protein, then the liver disease risk is highest. The normal allele is called M (although there are many specific M variants). Therefore, the risk of liver disease is determined by the combination of alleles (variants) with the risk highest for ZZ individuals and a lesser risk for MZ individuals.

Importantly, there are some variants that do not allow the liver cells to produce any AAT. These variants are generically called the Null alleles (Null means “zero”). If the liver makes no AAT protein, then there is no liver disease risk from that variant. Therefore, a ZNull genotype (one Z allele and one Null allele) would have a lesser chance of liver disease than a ZZ genotype. Both ZZ and ZNull genotypes produce very low blood levels of AAT placing the lungs at risk for lung injury.

The accumulation of misfolded AAT in the liver cells appears to make individuals more susceptible to other agents that injure the liver. Other forms of liver injury will likely be more severe in someone with Alpha-1 than if the disease was present in the general population. For this reason, there is an emphasis on making sure that the risk factors for other liver diseases are avoided. These are discussed in the Section entitled Information for all Alphas.

In order to begin to understand the liver disease associated with Alpha-1, it is useful to review the basic functions of the liver under normal conditions and to discuss the medical techniques used to assess liver health.

For more information about Alpha-1 and how it affects the liver, check out our You Your Liver and Alpha-1 Mini Skinny Guides or head on over to the Big Fat Reference Guide (BFRG):

If you are an AlphaNet Subscriber Portal user, you can access the BFRG here: