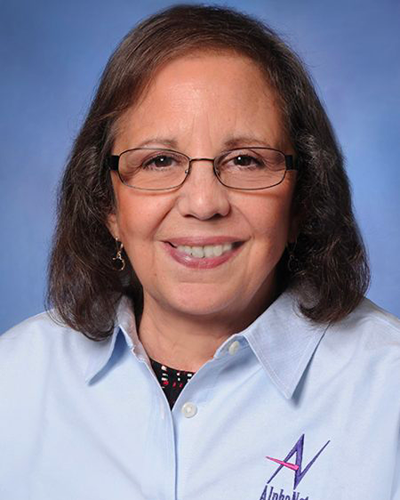 Hello.  My name is Lorraine Lanman and I would like to introduce myself as your AlphaNet Coordinator.

I was born in the Caribbean island of Trinidad.  My family immigrated to the U.S. to Miami, Florida when I was nine years old.  I lived there until I met and married my husband who was from Missouri.  We moved to Columbia, Missouri in 1976 and have been here ever since.  We have two grown children, a daughter and a son and two grandchildren who all still live in Missouri.  I retired in 2015 after working for the University of Missouri School of Medicine, Department of Surgery as a Medical Student Coordinator for 35 years.  I enjoy camping, fishing, reading, writing, spending time with my grandkids and going to their baseball and volleyball games.

My lung issues really became noticeable in my mid to late twenties.  By the time I was 42, I had pneumonia twice and several bouts of bronchitis.  I had been an intermittent smoker during those years and had developed a 24/7 cough that wouldn’t go away.  In 1996 I quit smoking.  Within two weeks the cough went away, but over the next 4 years I noticed that I would become short of breath if I had to walk for any distance.  By the end of 2000, I developed a chronic respiratory condition that did not respond to antibiotics.  I went to the ER where they did a chest X-ray and referred me to a pulmonologist.  The pulmonologist confirmed that I had emphysema.  He felt strongly that, even with my smoking history, that I was too young to present with COPD.

I was lucky to have an astute doctor who decided to do the simple blood test for Alpha-1.  The result was that I was a ZZ Alpha I with severe COPD.  The best thing to come out of that visit was that the fellow, a D.O., who was there that day was very kind and took the time to explain things to me which eased my shell shock.  My primary care doctor managed my inhalers for the next four years until 2006 when I got a very bad case of pneumonia which forced me to see a pulmonologist again.  I was able to get in with the same fellow I had seen four years earlier and he became my lifesaver.  He started managing my care and very gently introduced me to augmentation treatment which we learned about together.  I started Prolastin treatment in 2007 and never looked back.  It has truly helped me to maintain my lung function and my health.

I was introduced to AlphaNet and my first Coordinator helped me to understand my condition better and the role that augmentation would play in maintaining my health. I feel privileged to be able to serve you as your coordinator and to be able to give back to you the way my coordinators have given to me all these years.  In my line of work as a medical student coordinator I learned to be a good listener, to assist with educational needs and to be an advocate for others.  I look forward to doing the same as your AlphaNet Coordinator.  I am honored to be a part of the Alpha-1 community.